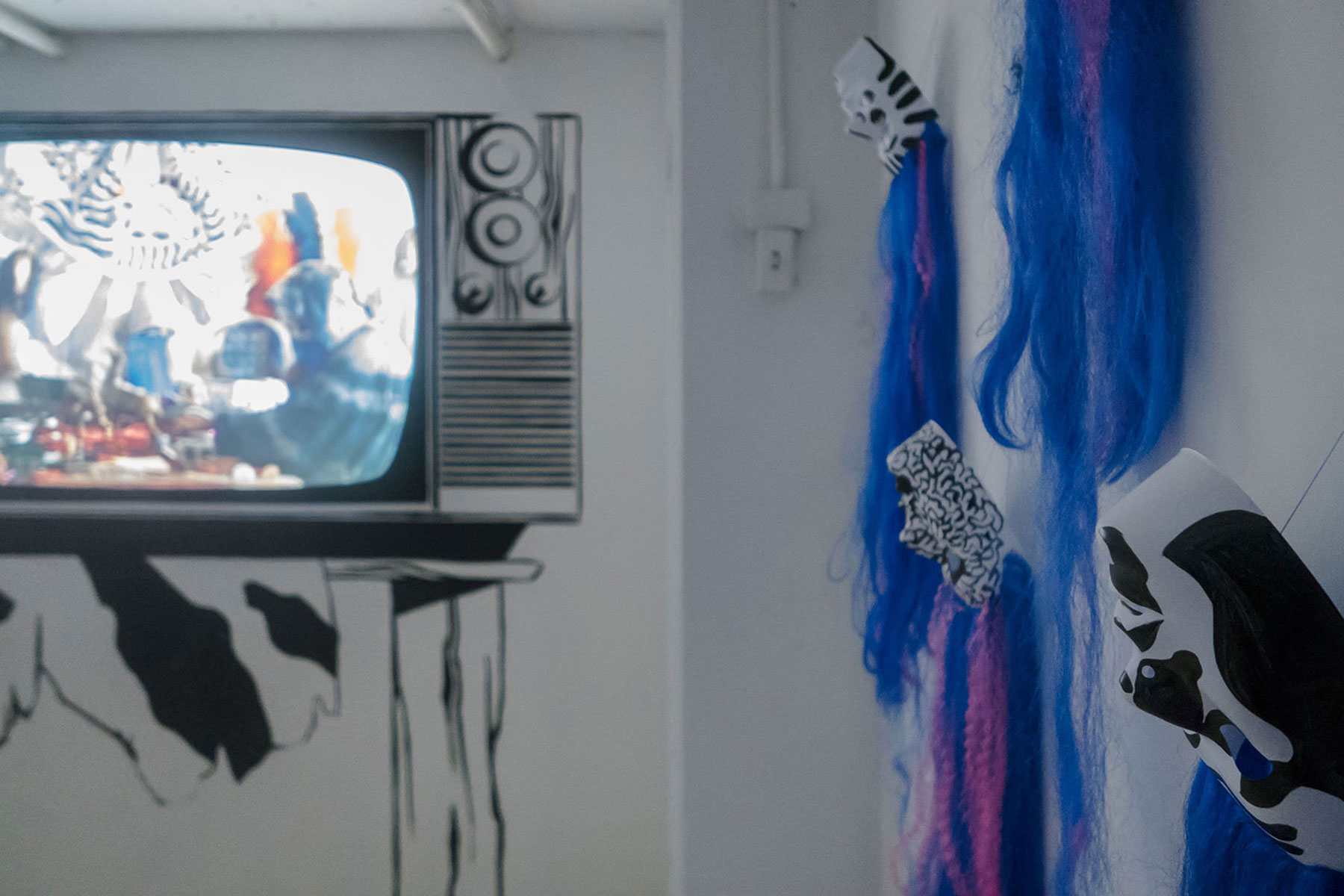 Opening August 5, 7pm - 11pm, with performance by the artists

Inflatable Deities adopt the personae of scientists from the future, reporting on an even more distant (and alarmingly regressive) future. A narrative video, shot on location in Nijmegen, the Netherlands, tells the tale of the scientists’ time-travel fieldwork. The gallery serves as a fictional laboratory in which future commercial products, ambiguously connected to the scientists' research, are displayed for sale. This new body of work aims to represent commercial space and the ways in which it embodies alienation, through the lens of dystopian fiction.

Accompanying text by Simon Schlesinger will be available.

Inflatable Deities is the collaborative duo, Jessica Mensch and Emily Pelstring. The two have been working together since 2009. Their projects are expanded fictions; they take form as videos, live performances, and multimedia installations. Together, they create nightmarish worlds centred on a cast of characters that have been developed through improvisation and the assemblage of costume pieces and props. Their body of surrealist fiction continuously evolves as characters morph and reappear across multiple works. Whether in the form of a sculptural installation or a live multimedia dance spectacle, their stories rely on dysfunctional diegetic systems in which objects, characters, and historical time periods overlap in paradoxical ways. The devices of feminist irony, satire, and camp are used to reinforce a critical perspective, mocking exclusionary, hierarchical social systems, and highlighting the role that artifice plays in traditional modes of representation.

Emily Pelstring is a media artist whose work spans the areas of installation, performance, animation, and video. Emily holds a BFA from Rhode Island School of Design in Film/Animation/ Video, and an MFA from Concordia University. Her work has been shown internationally in galleries, film festivals and music festivals, including Transmediale Berlin, Seoul International New Media Festival, L’Alternativa Independent Film Festival Barcelona, NeXT International Film Festival Bucharest, Antimatter Media Art Festival, Ann Arbor Film Festival, Pop Montreal, the PHI Centre, Khyber Centre for the Arts, FoFA Gallery, Powerhouse Galerie La Centrale, and the Judith and Norman Alix Art Gallery. Her work has been supported by residencies at the Experimental TV Centre, Studio XX, and SAW Video Association. She has done visual commissions for musicians including Aids Wolf, AroarA, Julia Holter, Slim Twig, U.S. Girls, and a Prism Prize nominated video for Yamantaka // Sonic Titan. Her ongoing collaborative projects are Inflatable Deities (with Jessica Mensch) and The Powers (with Jessica Mensch and Katherine Kline). She has taught Media Production at Concordia University (Montreal, Canada) and is now teaching in the Department of Film and Media at Queen’s University (Kingston, Canada).

Jessica Mensch is a Brooklyn/Montreal painter and mixed-media artist currently pursuing an MFA at Hunter College in New York, NY. Mensch received her BFA in Painting from the Nova Scotia College of Art and Design and has gone on to exhibit at such institutions as The Judith & Norman ALIX Art Gallery (Ontario), The Confederation Centre (PEI), PDA Projects (Ontario), The National Gallery of Canada (Ontario), Art Toronto, Superchief Gallery (NY) and Pop Up Gallery PS1 MoMA (NY). Mensch was the recipient of a Canada Council Grant for Visual Arts in 2014, and a finalist for the RBC Painting Prize in 2013. She has participated in residencies at, Extrapool (Nijmegen, Holland), The Banff Centre, Studio XX (Montreal) and Saw Video (Ottawa) and the FOFA Gallery in Montreal, Quebec.