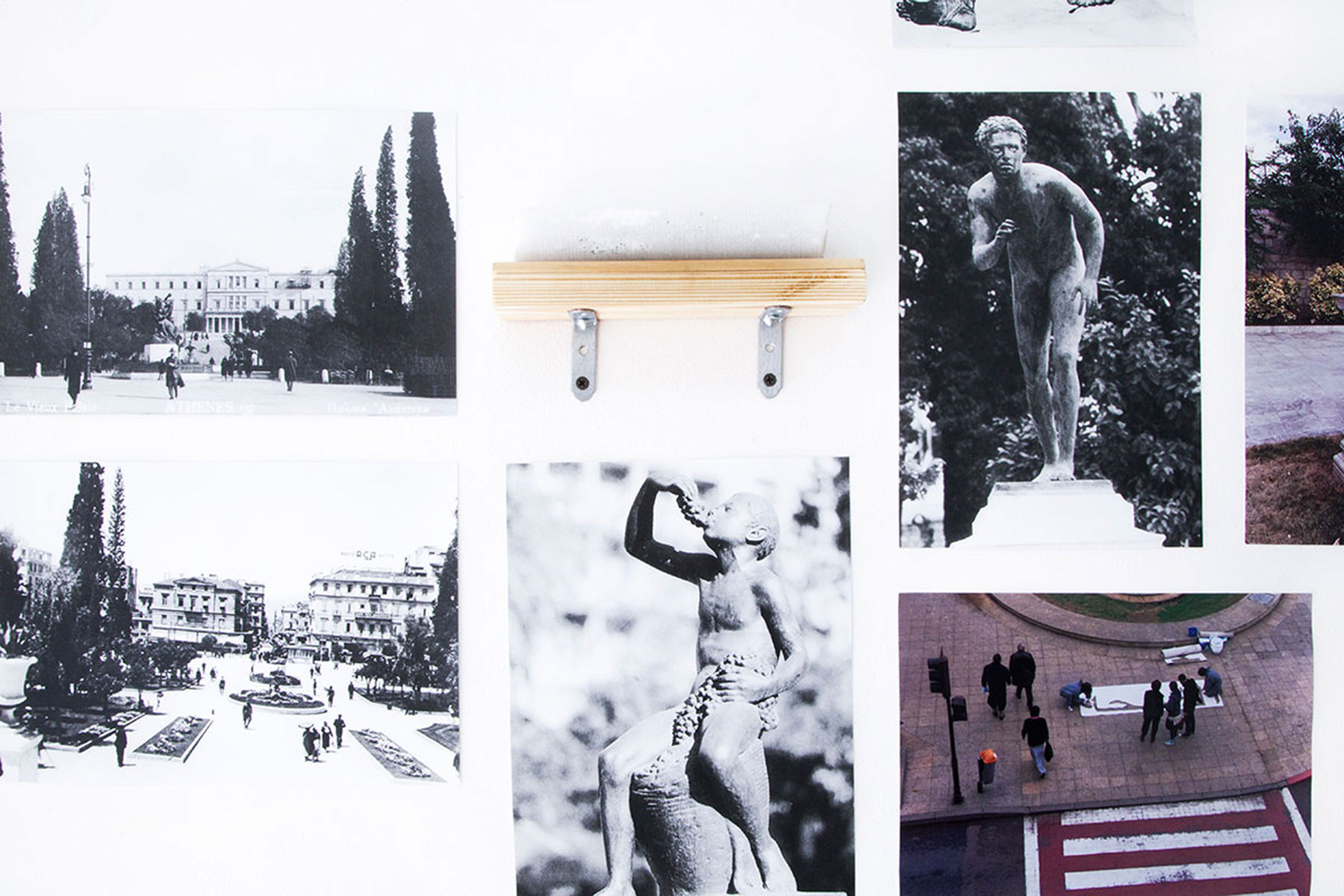 Opening May 17, 6pm - 11pm
Components of the exhibition were commissioned by ISET, Contemporary Greek Art Institute

We will all die. Our memory will live on through the stories of others. The clay will still stand for the living to view.

The work of Stefanos Ziras and Eleni Papadimitriou maps the creative process and public debates around the installation of sculptures, as well as the results of competitions aiming to change the urban fabric. Some of the examples of public art presented in their work were created, installed, and to this day remain in the public space, while some have been destroyed or withdrawn. Shown together, the potential, the relocated, the transitory or the ephemeral are shown to be not the exception, but the very modalities constituting our relationship with public space in the urban environment. The images develop an expansive and open archive of public art. The archive underlines the role political, social and institutional factors play in shaping relationships to public art, while also remaining sensitive to the complex influences of these factors in any given period.

Reflecting an interest in the impact of shared memory and the politics of the gesture on a more intimate scale, Flesh Marble Leaf and Twig presents new works by Toronto based artist Derek Liddington. In these works, Liddington worked with Chris Heller, Ulysses Castellanos and Cheyanne Turions to create a single object out of clay based on conversations that develop a shared memory. Forms are determined through a collaborative, and conversational exchange of rubbing, bending, pushing, clawing and kneading, rendering a physical record for the duration of the conversation. The collaborators, including the artist, become actors in a play, their performance captured in the crevices and gesture embossed on the surface of the clay. 100 pounds of clay is kneaded with the imperfect and often unsure traces of democratic marks. As the exhibition progresses the clay in the interior of the space will dry, compress and crack while the outdoor sculpture will be allowed to decay in response to the elements.

Eleni Papadimitriou has graduated from the School of Architecture of the Aristotle University of Thessaloniki and holds an MA in Scenography from Birmingham City University. She has collaborated with architectural practices in Athens, Istanbul and Milan, has participated in architectural competitions and has exhibited her work in Athens, Thessaloniki, Birmingham, Florence, Bergamo and Milan. Projects of hers have been presented in the international architectural press, both publications and electronic journals. She has worked alongside architects and directors designing exhibitions and curating, in terms of architecture, theatre shows. Eleni has also collaborated with Interaction Design Institute Ivrea as designer of interactive architectural applications. She is a collaborator of the L.A. based architectural firm X | Atelier and has taught at workshops, organized by X | Atelier, held at the Benaki Museum and the National Technical University of Athens. Recently she has collaborated with the Tokyo based Atelier Bow Wow. She is the co-editor of ANANAS e-fanzine.

Stefanos Ziras is an Architect and as of 2014 holds an MA in Architectural Design from the University of Thessaly. He has collaborated with architects and artists from Greece and abroad, has participated in international architectural competitions and some of his works have been presented at the twenty-fifth International Union of Architects World Congress (Durban 2014).His works have been awarded by the Technical Chamber of Greece (TEE) and have been presented in international publications and electronic journals. He is a collaborator of the L.A. based architectural firm X | Atelier and on the jury of the workshops run by X | Atelier at the Benaki Museum. He is an invited lecturer of the Stavros Niarchos Foundation. He is the Head Architect and designer of the Greek Pavilion of the 56th Venice Biennale, presenting the work of Maria Papadimitriou «Why look at Animals» AGRIMIKA. As an intermedia artist, he has participated in numerous group exhibitions – BABEL FRAGMENTS: REVISITED, Default 2015, MC Redux- other, next to important artists and architects». He is the co-editor of ANANAS e-fanzine.

Cheyanne Turions is an independent, Toronto-based curator and writer.

Chris Heller is a video-based performance artist. From his own physical reactions, Heller is interested in the limits and mechanisms of the human body. His work has been exhibited in several events and exhibitions in Toronto, as well as in Turin, Italy.

Ulysses Castellanos is an artist, writer, filmmaker, and curator based in Toronto. His texts have been published by BLOUIN Artinfo, V Tape, and AluCine Latin Media + Art Festival, as well as in numerous artist monographs. His films and media-art projects have been shown in venues and festivals including Italy, the US, Canada, Taiwan, Germany, Columbia, and Argentina. He is a member of IKT Association of Curators of Contemporary Art, and an alumnus of The Canadian Film Centre’s Interactive Media program. He is represented by Georgia Scherman Projects.