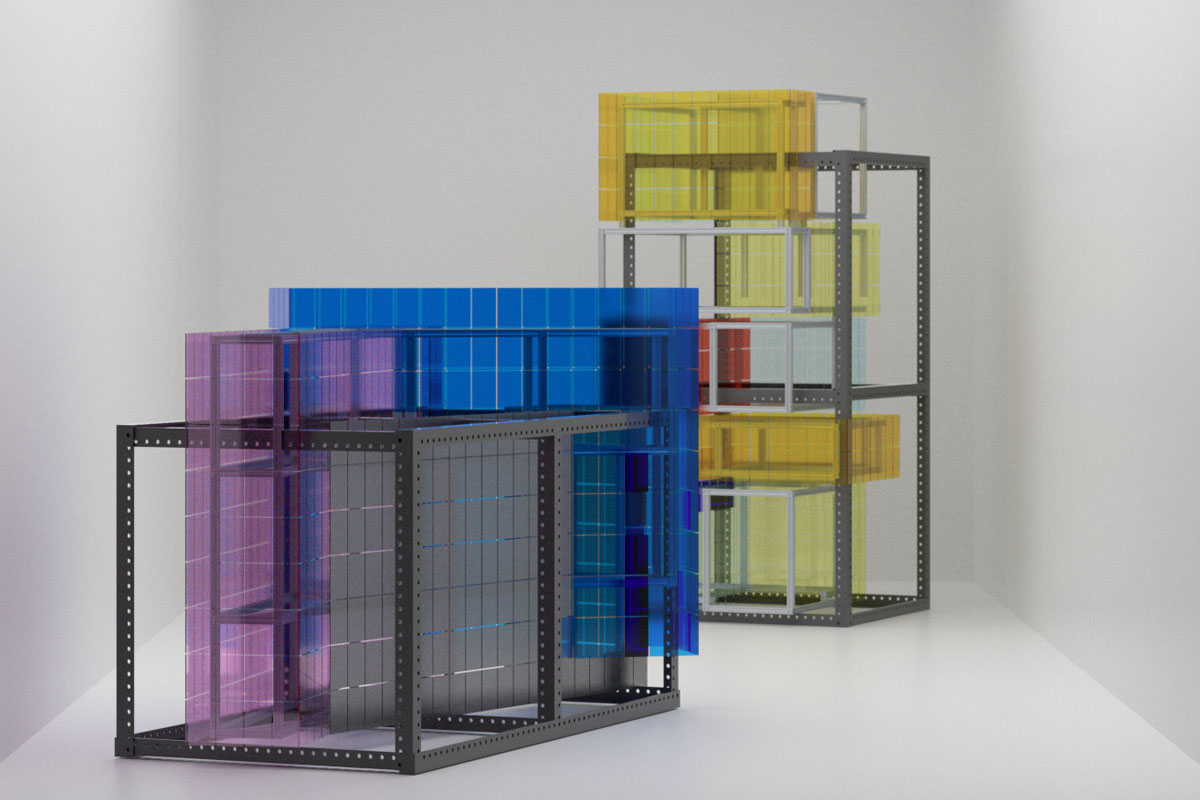 Occupying a small commercial addition in a sprawling, dilapidated victorian house, 8eleven is situated across from a slightly ramshackle ‘Chinatown Centre’ postmodern era mall and is overlooked by the construction boom which has enveloped the downtown core. Possessing a forced perspective created by its tapering internal dimensions, the gallery becomes a kind of viewing chamber or ‘light box’ when viewed from the street.

Employing digital engineering in their studio practice since the early 2000s, Young & Giroux have had many uncanny experiences between their computer models and their final realized works. Continuing in the spirit of 8eleven’s body of experimental programming and utilizing the gallery's street view, Young & Giroux present two new works in their Curtain Wall series, combining sculpture and digital printing to address the fluidity between conceptualization and execution in these highly engineered assemblies.

The Curtain Wall sculptures use three very different material systems: standard industrial steel shelving, an extruded aluminum framing system; a custom designed and fabricated miniature curtain-wall glazing system of ‘spider clamps’; and coloured acrylic panes. These sculptural compositions are a material mediation between glass architecture and the modernist legacies of formalist sculptors like Anthony Caro and David Smith, filtered through the repressed space of warehousing and logistics. The origins of this material palate are derived from Young & Giroux’s first film Every Building, or Site, that a Building Permit was Issued for a New Building in Toronto in 2006, a work that presents the city as a series of jump cuts between warehouses, banal corporate and condo glass architecture.

Tangerine Panther is a day dream for our present modernity – a meditation of surface and structure, of masses and planes free of the pollution of occupation and use – which serves as a monument to itself and the productive capacity of the economy. By foregrounding the layering of structure and componentry to support its skin (the work consists of approximately 11,000 individual components), Tangerine Panther self-consciously reflects how the practice of architecture exists between the poles of idealism and instrumentalization.

Exhibition will be accompanied by an essay by Milena Tomic, as well as a public program including a conversation between the artists and Public Studio, and walking tour of new tower construction in Toronto.

Daniel Young and Christian Giroux have been collaborating since 2002. They produce cinema installations, public artworks, sculptures and books. In 2017 Young & Giroux will be launching a new artist book Berlin 2013 / 1983, for a film work commissioned by InterAccess, as well as complete Three Points Where two Lines Meet, a public artwork located at Vaughn road and Bathurst for the City of Toronto. Christian is an Associate Professor in the School of Fine Art and Music at the University of Guelph. Daniel splits his time between Berlin and Kensington Market.

Elle Flanders completed her PhD at York University’s newly created practice-based research visual arts program in 2014 and has mentored with some of the art world’s most notable artists, including Mary Kelly and Martha Rosler, at the Whitney ISP and Rutgers University, respectively. Flanders has a strong history of community engagement and has created award-winning films and installations. Her longstanding interest in the socio-political realm and how it relates to landscape have led her, in collaboration with Sawatzky, to produce site-specific public art installations that are immersive and re-examine the role of audience as participant/witness.

Tamira Sawatzky is an architect by training, having worked for the firm MJMA in Toronto from 1999–2010, designing large-scale, award-winning, community-based projects. Sawatzky began a collaborative art practice with Elle Flanders in 2009, bringing a spatial focus that contributes to the development of immersive installations and multifaceted exhibitions. Sawatzky’s architectural background lends itself to an emphasis on the structural, provoking a conversation between art and architecture and the politics of landscape and place. Since forming Public Studio, Sawatzky and Flanders have garnered critical attention, winning several public art commissions and awards, including the 2013 Toronto Friends of the Visual Arts Award. A publication about their work is slated to be published by Black Dog Press in 2018.

Milena Tomic is an art historian and writer based in Toronto. Her research specialty is contemporary art after 1960, with an emphasis on quotational strategies. She completed her PhD at University College London and recently held a SSHRC Postdoctoral Fellowship at McGill University. Her peer-reviewed articles have appeared or are forthcoming in Word & Image, Oxford Art Journal, Tate Papers, OBJECT, and TOPIA. She has also written for frieze, Art in America, ARTMargins Online, C Magazine, Border Crossings, Fillip, Journal of Curatorial Studies, CritCom, and other venues.