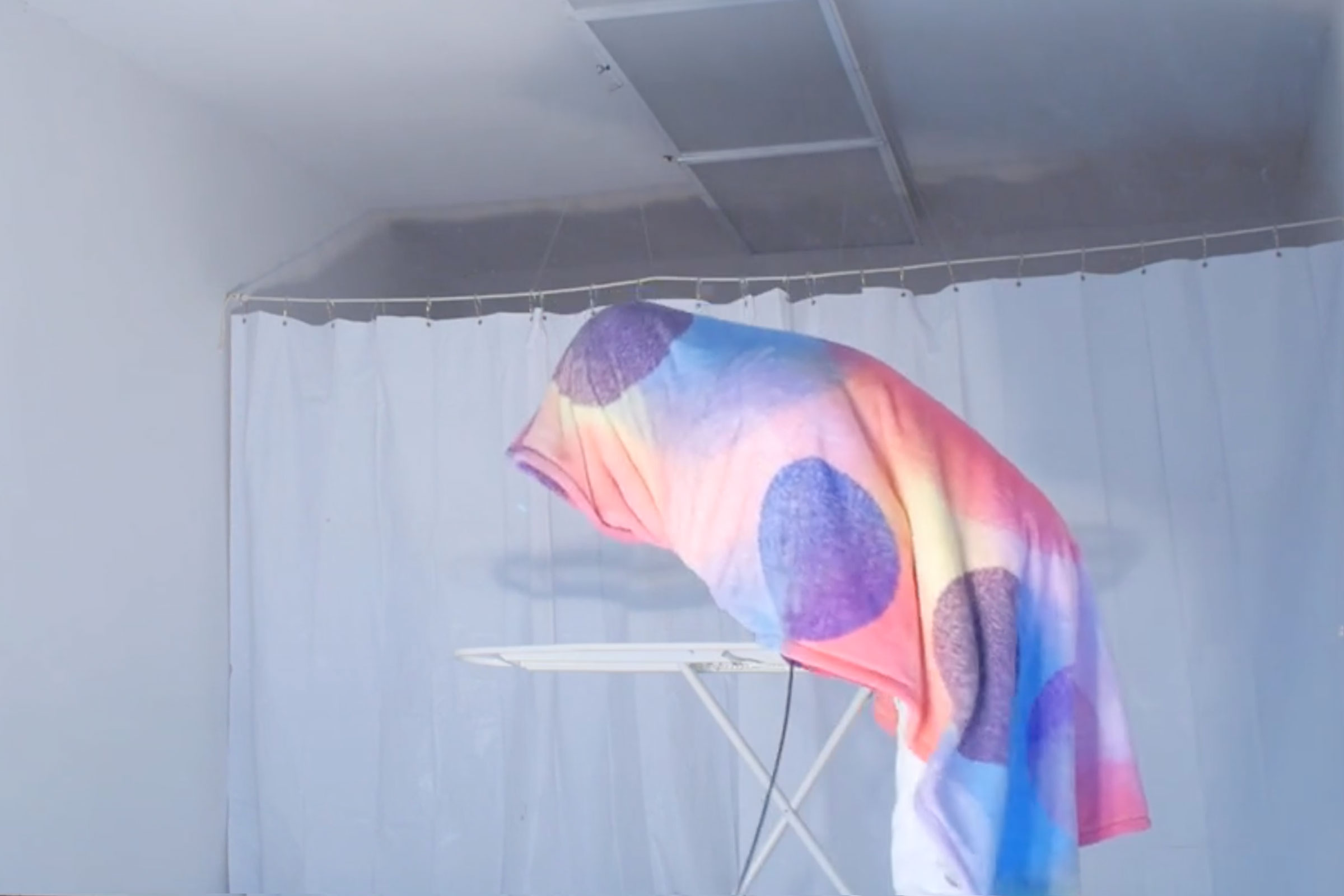 “In an all-white space, occupied by a white performer in white clothes, the [brightly patterned] blanket stands out as the only substantial source of colour. When Moser pulls it over her head, it becomes a gaudy substitute for the swath of gray felt that covered Joseph Beuys in in his infamous 1974 performance I Like America and America Likes Me. Standing in profile to the window, Moser hunches forward, her upper body rocking up and down to a looping, poppy synth track. Speaking in time with the music, she says,

…on some days, I get the strange sensation that we've been here before, or, more likely, I've borrowed a piece or two, or, more, likely, I'm just reliving a past life that's not mine, and that's alright. I'm getting by, by getting by, and that's alright, it's just one of those things, whispering quietly: "I like America and America likes me," or, some variation, one of Seven Easy Pieces, and, so it goes.

The last sentence of this brief discourse on creative genealogy traces a historical trajectory for performance art that is either degenerative or liberating, depending on how committed you are to the idea of originality. Here we are reminded of how, in a single generation, the figure of the performance artist transformed from paragon of shamanistic authenticity typified by figures like Beuys and Marina Abramovic, to the performance artist as provider of poker-faced entertainments in a popular culture that consumes and monetizes everything, typified by Abramovic's recent work, of which Seven Easy Pieces is an exemplary model. Instead of decrying this shift, however, or seeking a return to the seriousness and authenticity of performance art in the early 1970s, when Beuys and Abramovic first made their mark in an art world that set itself staunchly against the frivolity of pop culture, Moser engages that culture—in its current, pumped up, hysterical form—with absolute seriousness. In this and other live performances, Moser wields the shamanistic power that made Beuys and Abramovic art-world stars, luminaries of the eternal and universal, but she applies it to the quotidian culture of WebMD, corporate jargon, internet shopping, youthful nostalgia and guided self-improvement.”

Bridget Moser is a video and performance artist who has presented work at galleries and artist-run centres across Canada, including La Centrale, Montreal; VIVO Media Arts Centre, Vancouver; Video Pool, Winnipeg; The Khyber Centre for the Arts, Halifax; the Art Gallery of Ontario, Toronto; and Mercer Union, A Centre for Contemporary Art, Toronto. She has also presented projects across the US and Europe, and has been a resident artist at The Banff Centre and Fondazione Antonio Ratti in Como, Italy. She performs regularly at Doored, a monthly performance art and comedy show organized and hosted by Life of a Craphead (Jon McCurley & Amy Lam) and recently appeared on ARTINFO Canada’s list of the Top 30 Under 30. She lives and works in Toronto.